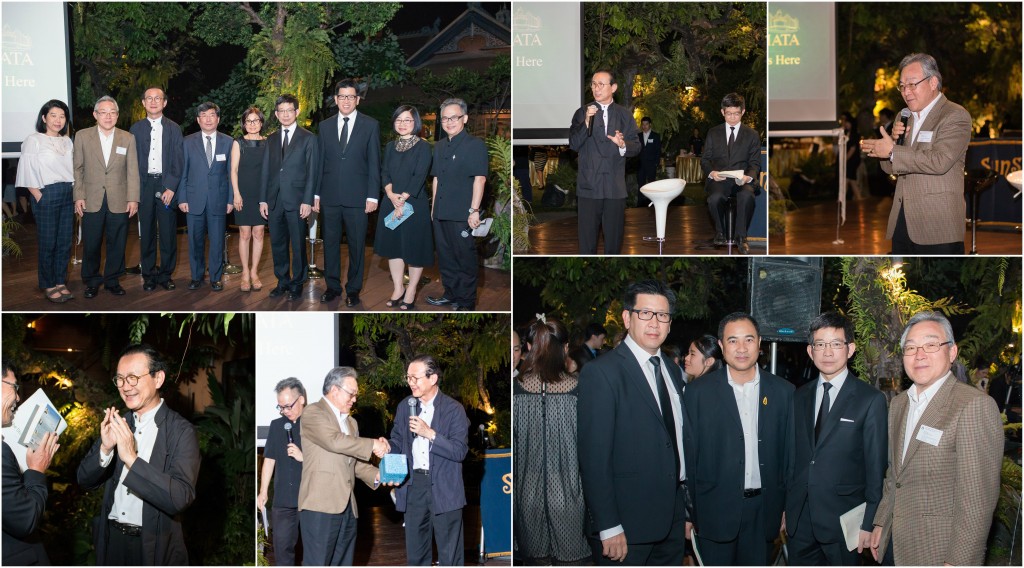 The Malaysian-Thai Chamber of Commerce (MTCC) on 13 December 2016 held a Dinner Talk & Networking Night in Bangkok. The venue was graciously hosted by Mr. Vikrom Kromadit, CEO of Amata Corporation, in his private residence at Kromadit Building, New Petchaburi Road. The occasion was graced by Dr. Kobsak Pootrakool, Vice Minister to the Office of Prime Minister, Dr. Ekniti Nitithanprapas, Director General of State Enterprise Policy Office, Ms. Duangjai Asawachintachit, Deputy Secretary General of Thailand Board of Investment, and attended by over 250 people comprising delegates from the Malaysian Embassy, Foreign Chambers, MTCC members and guests.

At the opening, attendees were treated to a delightful buffet spread; specially selected Thai and Malaysian street foods. All guests mingled well in the beautiful garden with the cool December air making the evening all the more pleasant.

Upon arrival of distinguished speakers, an opening speech from MTCC Chairman Mr. Yeap Swee Chuan and welcoming remarks from Mr. Vikrom Kromadit were given to hearty applause from the guests. Mr. Vikrom proceeded to call all speakers that he personally invited specially for this event on stage and introduced each individual’s distinguished background. The speakers shared Thailand’s Eastern Economic Corridor Development plans that have already been put in motion, as well as new investment privileges offered by Board Of Investment aimed to attract new business investments into the region to develop into a leading economic zone in ASEAN.

Q&A session was then moderated by Mr. Vikrom, who through wit and cajole, charmed the crowd and kept them engaged with the speakers. Mr. Vikrom also took the opportunity to share his joy by announcing Amata’s joint venture with his alma mater National Taiwan University to build a new university campus. The dinner talk ended with MTCC giving Malaysian-made Royal Selangor pewters to Mr. Vikrom and all four distinguished speakers as tokens of appreciation.

t the conclusion of the evening, Mr Vikrom being the exemplary host, patiently stood at the exit door to bid guests farewell and signed autographs for his published books, which he gave free to all guests that evening. Many guests queued to wait their turn for the autograph and a quick photo with Mr. Vikrom.

MTCC wished to extend special thanks to Mr. Vikrom and his Amata team for hosting and team effort, making the dinner networking event a huge success.